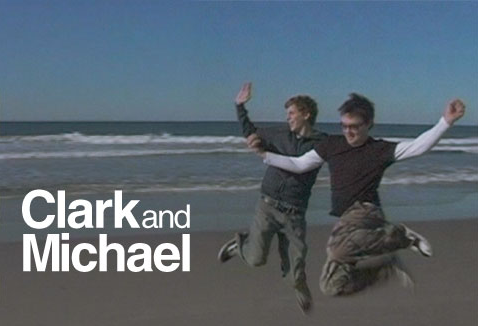 First, in fairness, came This is Spinal Tap.  That was the genre-breaking beginning of the “mockumentary,” the inflection point of this wonderful innovation.  But before The Office exploded, and before Netflix web-streaming had brought television online, there was Clark and Michael.

The brainchild of pre-fame Michael Cera and Clark Duke, the show was delivered as a web-series before web-series were a thing, breaking the fourth wall by filming filming, by taking a meta-contextual step beyond the camera long before Jim was lamenting Dwight’s antics with a knowing wink at the screen (or Tim and Gareth, if you prefer — which I do).

Filled with deadpan, serious-sad humor, and flush with rising guest stars, this is a concept that was well, WELL ahead of its time.  It almost hurts the brain to consider the thought process of its writing and inception.  Michael Cera rode this to Arrested Development and beyond.  And Clark?  Well, Clark Duke had a harder road.

It’s become a trend these days for young intellectuals to trash J.D. Salinger, and bear with me here, but it grinds me up inside.  It’s very easy to disparage a Perfect Day for Bananafish when you’ve read a thousand shitty short-stories that end in suicide, all them — like it or not, know it or not — owing a debt to Salinger.  Same goes for Rushmore and The Graduate and The Royal Tenenbaums, they would never have existed without Holden Caulfield and his phonies and his kid sister Phoebe and her floppy hunting hat.

Having been raised on a generation of Salinger-influenced art, it’s now a hip trend to talk down his work, and I understand how it might seem uninspired in the wake of everything it inspired.  But that’s lunacy.  Salinger was a genius, an innovator, and while he may have been an asshole, that doesn’t mean he wasn’t great.

Even if you prefer his imitators (which I don’t), he should get credit for his creation.  I’m not calling Clark and Michael J.D. Salinger — far from it — but innovation means something, something extraordinary, and if it’s your creation?  Well, credit is the only currency that matters.  For what it’s worth, this is me, giving them theirs.

Also, not for nothing, their show is dark, and sad, and funny, and very sweet.

“Despite the skepticism of their friends and family, Clark and Michael are convinced that they have a TV script that will make them stars.”