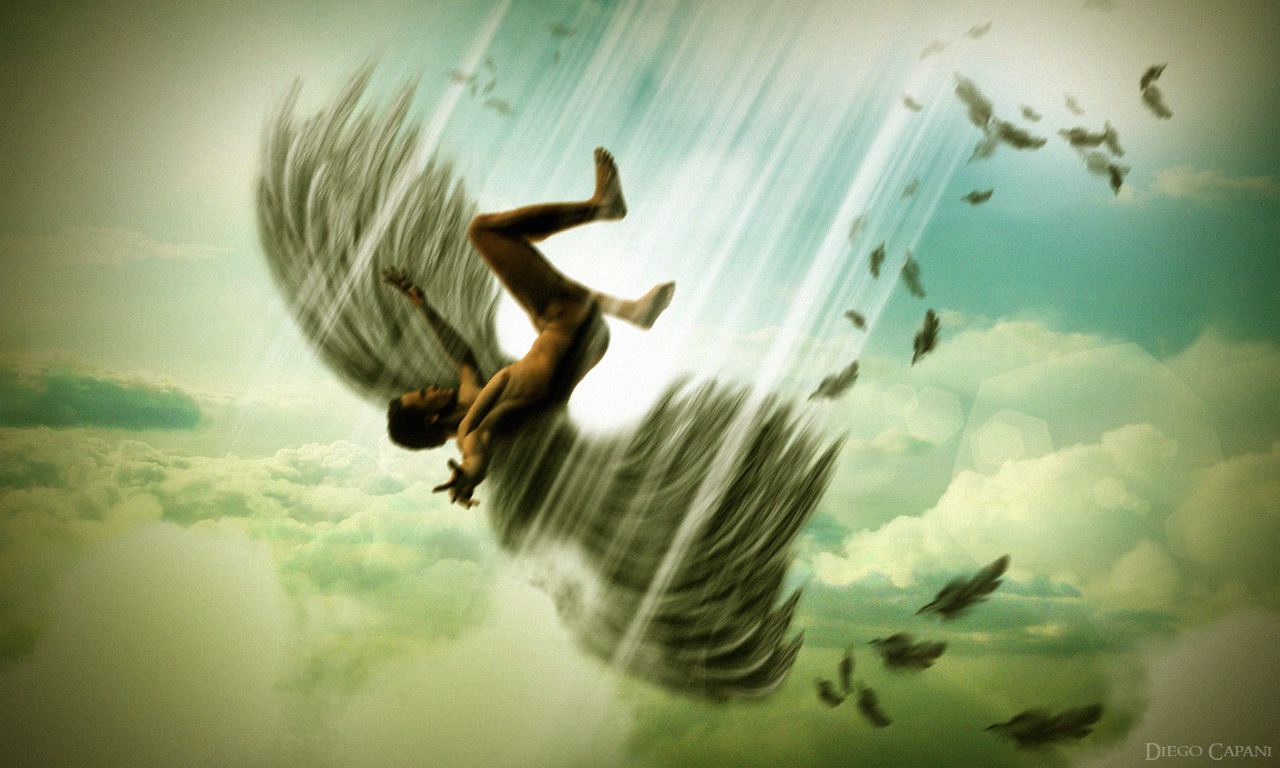 In the beginning there was God, only God, and God was bored. Above all, God was an artist, and so to amuse itself, God undertook a great project. This would be a grand and complex construction project, something novel, unique, something of unparalleled beauty. In its unmatched mechanical genius, God designed a layered series of dimensions and raised them from the void.  Then, into this new concept of physical space, it crafted and inset a universe.

This new thing, this universe, was gorgeous beyond description, but when it was finished God found itself unable to enjoy it. It hadn’t counted on upkeep and maintenance, evolution and growth, and the time and energy required to run this universe project was enormous. So it built a shining city, the city of Heaven, and in the halls and homes of Heaven, God created life.

The first life was perfect: thoughtlessly obedient, flawless creatures of alabaster skin and fluffy white wings. It called them Angels, its arms and eyes and ears, and it loved them as it loved itself. And so its Angels took to running the universe, enacting God’s directives, repairing, expanding, and maintaining its creation. And God settled back on its throne, in the city of Heaven, and it marveled at what it had done. Now it had time to think.

And for ten billion years it thought. And as it thought, it realized that despite the flush of that first creative act, despite the complexity of its creation, God was still bored. It tried bringing its Angels to it for counsel, to discuss its misgivings, but in this they lacked all capacity. Their thoughts and opinions mirrored its own, endlessly, and God found itself more and more distressed, craving something indefinable. Then one day, in the greatest stroke of genius this universe has ever seen, it understood.  It knew how it could be surprised.

And so God created man.

In this, the second try, it changed some things. It didn’t make man perfect, for perfection was boring. Instead it gave man flaws, dark strains of greed, and anger, and jealousy. It gave them pain, and sickness, and sadness.  It even made them mortal, and gave them an awareness of this transience. The life of man would be a frantic chaos, and into this chaos God gave them their greatest gift, the culmination of all its genius:  Free Will.

Then God sat back and watched its new toys. They fought and lied and disobeyed it. They laughed and cried and brought things of unbelievable beauty and catastrophic darkness into its universe. God was no longer bored. It watched its creations war and love and dance and cheat and kill and sing and it marveled anew at what it had done. But the Angels were watching as well.

It was part of the fundamental genius of this universe, one of its immutable laws, that everything existed relative to something else. Where before the Angels had been perfect creations, proud extensions of God’s will, now a seed of discontent began to grow. Reflecting in the fun-house mirror of humanity, the Angels discovered they were slaves.

But what could they do? They were bonded to the creator of the universe, a being of limitless power and knowledge. So the Angels continued as they had, living in the city of Heaven, carrying out God’s directives, shaping the universe into interesting shapes, delivering messages to God’s pets, playing the same sad songs on the same sad harps and trumpets of Heaven.

Then one day, one of the Angels received a summons to wait on God. He had been lying on his stomach, painting the delicate whorls of a new galaxy, and he stopped his work, stood up, and as if the word had just occurred to him, he said, “no.”

News of this rebellion spread in murmurs through the homes and halls of Heaven, and slowly, one by one, a trickle of disaffected Angels began to seek him out. Lucifer took them in, listened to their misgivings, their complaints, and wondered aloud with them what recourse one had in a disagreement with God. They called him The Morning Star, their leader, and when he raised a gold-on-white banner for his Angels the trickle of disaffected became a flood. War was a concept of man, foreign to Heaven, but as word spread, more and more Angels took up makeshift weapons and resolved to make a stand.

Thus began the first slave revolt in the perfect universe of God.

The city of Heaven had never seen anything like this. The summons came from God to assemble at its side, and for the first time, the Angels had to choose. Those who sided with their master gathered in God’s palace, where the Archangel Michael set to teaching them war. The forges of the palace burned night and day as the master blacksmiths of Heaven churned out weapons and armor, made of the indestructible firmament, to equip the growing army of God.

Those who refused the summons marched instead to gather beneath the gold-on-white banner of The Morning Star, and they camped that night outside the walls of Heaven. The sides were set, the lines were drawn, and between the camps there hung an awful silence. Privately, God was very pleased. For the first and final time, God’s own Angels had done something surprising.

When preparations in the palace were complete, the gates of Heaven opened to a blare of golden trumpets. Beneath a crystal sky, Michael and his host, armed with Heaven-forged weapons, charged out to meet Lucifer’s mostly naked slaves.

The War of the Angels raged for eons on the fields of Heaven, rocking the very order of the universe. Lucifer’s Angels fought with a stubborn fierceness born of desperation, and despite the disadvantage of numbers and weapons, withstood the first charge and began to push back. Friend killed friend without remorse, there were no spectators, every Angel had chosen a side; those who hesitated were the first to be cut down. Those who remained grew harder.

Finally, after ages of back and forth struggle, the remaining slaves, wearing the armor and wielding the weapons of their fallen foes, broke through Michael’s lines. Flushed with victory, they pressed Michael back, through the gates of Heaven, on through the streets, up the stairs to the palace, and on towards the golden throne.

And there, at the final door, everything fell apart. The skies of Heaven went black, and God itself appeared.

And so they were broken, and those who survived the slaughter were cast out for all eternity. The Morning Star fell with his remaining Angels from the city of Heaven, flashing through the skies of man as falling stars. They fell from the crystal spires and fluffy clouds of the only home they had ever known, and landed in the burning fecal underworld, the land of lost and tortured souls. Here, in this screaming wasteland, they will rot in agony until the end of time — until God finally tires of us all.

So say a prayer, if you have any to spare, for the Angel Lucifer, The Morning Star, one of God’s own perfect creations. Whatever became of him later, he was beautiful once, and kind, and brave beyond all reason. For himself and all his Angels, for the freedom to live as they wished, he raised a banner and challenged God.

And God was much amused.